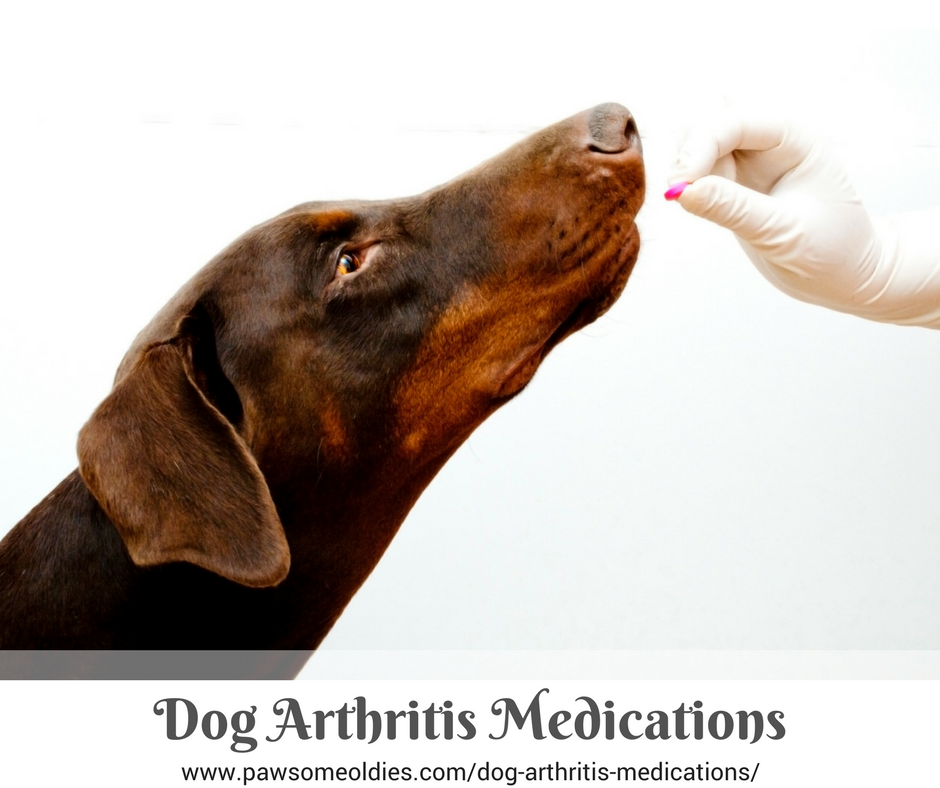 Dog arthritis medications, if used carefully and strategically, can bring relief of joint pain and discomfort to our old dogs.

This is Part 5 of my “Ultimate Dog Parents’ Guide to Arthritis in Old Dogs”.

In this post, we are going to look at some prescription dog arthritis medications (such as NSAIDs) that are used to manage pain and treat arthritis in dogs.

There are several classes of medicines that can be used to treat dog arthritis, but perhaps the most commonly prescribed class is NSAIDs.

This class of medications is known for reducing pain, inflammation, and fever. They work by slowing the production of chemicals in the body called prostaglandins, which cause pain and joint damage.

Risks and Side Effects of NSAIDs on Dogs

Although many vets prescribe NSAIDs for dog joint pain and arthritis, and reassure dog parents that these drugs are very safe, NSAIDs (like all drugs) can cause some side effects in dogs.

The most common side effect is tummy problems, such as diarrhea, vomiting, appetite loss, bloody stools, ulcers, constipation.

In some dogs, NSAIDs can cause kidney or liver damage, although it is rather rare.

Other rare side effects include:

Precautions of Use of NSAIDs

How to Use NSAIDs for Dog Arthritis

We can use NSAIDs in four different ways:

Choosing an NSAID for Your Old Dog

There are quite a few NSAIDs on the market, how can you choose a suitable one for your dog?

Here are some of the things to consider:

Once you and your vet have picked out an NSAID, you can try it on your dog for two to three weeks.

During these weeks, keep a record of your dog’s activity level, pain level (better or worse or no change), any side effects, etc.

I have made a printable for you to keep records. Download it here.

If the NSAID seems to be working well, continue using it. You may want to visit your vet after 2 weeks to see if it is OK to reduce the dosage and/or frequency of the drug.

If the NSAID is not good for your dog, don’t give up! Try another one (but remember to wait at least 72 hours before starting a new drug).

Some Common NSAIDs for Dogs

Below you can find summarized information of FDA-approved NSAIDs for dogs.

All precautions mentioned above apply to these NSAIDs and I have included drug-specific precautions below as well.

Not recommended for dogs with known bleeding disorders (e.g. von Willebrand’s disease).
Labrador Retrievers seem to be more commonly affected by Carprofen than other breeds.

Should not be given to dogs with known diseases of the kidney, liver, or stomach.
Meloxicam stays in the body longer than other NSAIDs. If switching to another medication, wait at least one week after the last dose of Meloxicam.

Should not be given to dogs with known diseases of the kidney, liver, or stomach.

Grapiprant is safer and is recommended for dogs who cannot tolerate other NSAIDs.

There are also a couple of injectable dog arthritis medications.

You may have heard of Adequan®? It is an injectable polysulfated glycosaminoglycan (PSGAG).

PSGAGs are found naturally in joint cartilage and Adequan seems to work in the same way as glucosamine and chondroitin. It seems to reduce inflammation and pain.

The injected medicine reaches the joints within 2 hours of injection and remains in the joints for three days. So, injections have to be made two times a week for up to 4 weeks, with a maximum of 8 injections.

Another injectable dog arthritis medicine is Hyaluronan, which is also found naturally in the joint. It acts as a lubricator and can be injected in the arthritic joint.

The drawbacks of these injectable medications are costs and inconvenience.

Another class of dog arthritis medications are steroids.

As we all know, steroids are powerful drugs but come with a lot of nasty side effects. So using steroids long-term to treat arthritis in old dogs is not such a good idea.

In fact, long-term use of steroids can add to the destruction of cartilage. The drugs can also weaken muscles and other soft tissues.

The only time steroids are used to treat arthritis is for the treatment of immune-mediated osteoarthritis in dogs, such as rheumatoid arthritis, and when the dog is very ill.

The one class of dog arthritis medications that is relatively safe and can help reduce pain and inflammation is NSAIDs.

They seem to be a good choice if your dog has the occasional pain.

They can also be used in reduced dosage in conjunction with other treatment options (e.g. supplements, natural remedies, etc.) to make the dog more comfortable.

Be sure to work with your vet to find one that works for your dog.

Back to Part 4 of Ultimate Guide