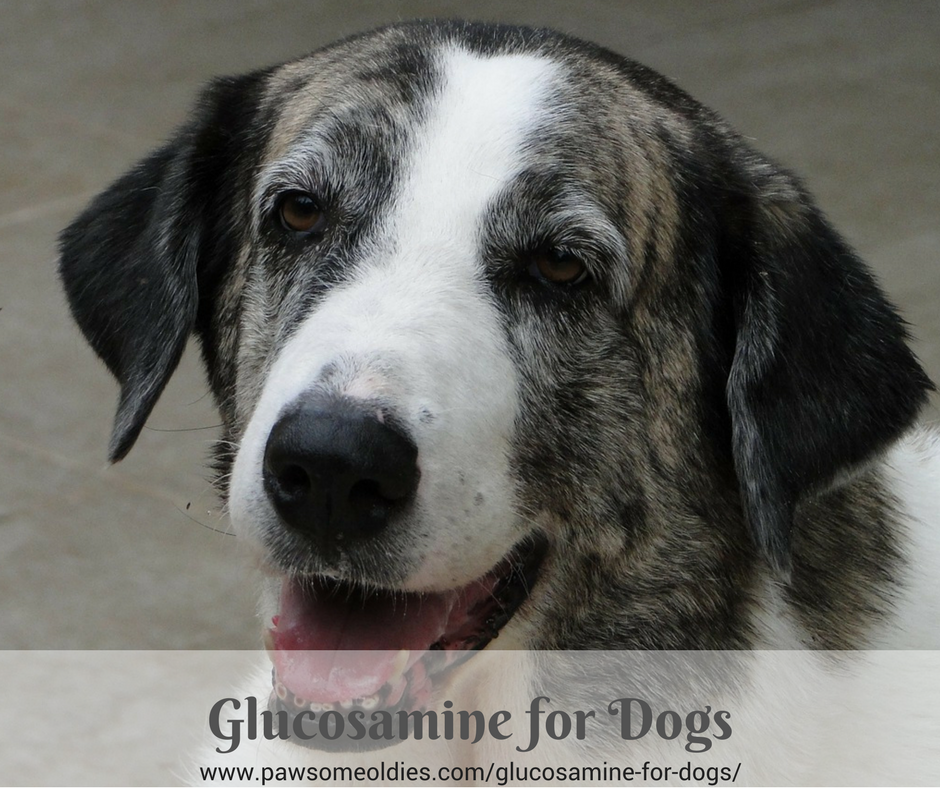 Glucosamine for dogs is commonly recommended by vets to help prevent arthritis and to actually slow down joint deterioration.

This is a post that forms Part 2 of my series of “Ultimate Dog Parents’ Guide to Arthritis in Old Dogs” – Supplements for Dog Arthritis.

What Exactly is Glucosamine

Glucosamine is found naturally in large quantities in cartilage. It is composed of a sugar and an amino acid.

As a building block of cartilage tissue, glucosamine is used by the body to make and repair cartilage.

Glucosamine molecules are great shock absorbers because they have a low compressibility rate. Additionally, these molecules have the ability to absorb and hold water, making them an excellent joint lubricant.

Supplements of glucosamine are mostly derived from chitin found in the shells of shellfish such as the Alaskan king crab. Glucosamine comes in the chemical forms of glucosamine sulfate and glucosamine HCI, both seem to work for arthritis in dogs.

Glucosamine for Dogs with Arthritis

Some vets (and dog parents) swear by drugs such as NSAIDs when it comes to treating dog joint pain and arthritis. But understand that these drugs do not help prevent or slow down joint deterioration.

By giving these drugs to dogs with arthritis (especially as a long-term treatment protocol), you are doing more harm than good.

Because these drugs work very well in masking pain but do not address the root problem (joint deterioration). As a result, the dog will run the risk of over-using the damaged joint (as he feels little or no pain), causing it to deteriorate further.

On the other hand, glucosamine helps with the creation of healthy cartilage.

By supplementing our old dogs with glucosamine, we are basically providing the body with an essential component that helps produce healthy cartilage cells to replace the damaged ones. By so doing, we are stopping the cycle of cartilage loss.

OK. I know there are skeptics out there saying, “Where’s the proof?”

If you look at scientific research and studies, you will find mixed reviews. Quite a few (such as this) say glucosamine works, but others, such as this one that is a study on dogs, are inconclusive.

But since glucosamine is safe and inexpensive, and there are lots of anecdotal reports by dog parents (including myself) and vets attesting to its effectiveness, wouldn’t you give it the benefit of the doubt?

Dosage of Glucosamine for Dogs

Supplements of glucosamine for dogs come in pills, liquid, powder, and chews. Many vets are of the opinion that they all work equally well.

For oral glucosamine supplements, daily dosages are as follows:

If possible, give the supplements separate from meals, and always start with high doses (e.g. if your dog is 5 pounds, start at 500 mg) to see if your dog shows good results. If you see improvement, scale back the dosage and see if the improvement can be maintained at a lower dose.

There is also an injectable glucosamine product is called Adequan®. It is given by intramuscular injections, usually in a dosage of 2 mg/lb twice a week for a month, not to exceed 8 dosages.

Injecting glucosamine directly into the bloodstream without going through the digestive process results in higher absorption rates, so the dosage for injection is lower. And the results faster.

But the drawbacks are cost and not as convenient as the oral form of glucosamine supplements.

When it comes to supplements, every dog responds differently. So don’t be discouraged if your dog doesn’t respond to one glucosamine product. If you don’t see any improvement in 4 weeks, try another product.

As mentioned before, glucosamine is generally safe. But (there’s always a “but”!) do not give it to your dog if:

Which Oral Glucosamine Product to Use

There are a lot of different products of glucosamine for dogs on the market right now. Many of them contain more than just glucosamine. These products combine glucosamine with other added ingredients, such as MSM, chondroitin, herbs like yucca, turmeric, etc.

When choosing a suitable product for your dog, consider the following:

As mentioned above, many products have other ingredients in addition to glucosamine. Make sure that the added ingredients are natural and safe for dogs.

It has been found that using glucosamine and chondroitin together can slow down cartilage damage better than if using either of these alone. So bear that in mind when choosing dog arthritis supplements for your golden oldies.

Some Recommended Products of Glucosamine for Dogs

: This product contains only 2 main ingredients: Glucosamine and Astaxanthin (an antioxidant).

: If your dog doesn’t like pills, this is a glucosamine product in powder form. It contains Glucosamine, Chondroitin, Hyaluronic acid, as well as herbs effective for arthritis such as Yucca, Alfalfa, Devil’s Claw, Nettle, Celery Seed, Black Cohosh, Ginger, Turmeric, and Cayenne Pepper.

Other Sources of Glucosamine for Dogs

Besides supplements, dogs can also get glucosamine from certain food sources – in the form of a snack. (Yay for Fido!)

What food sources are rich in glucosamine?

Well, since glucosamine is found in cartilage, it follows that cartilage, such as trachea, is one food source. (Duh!)

Green lipped mussels (a shellfish from New Zealand) is also a good source of glucosamine (as well as Omega-3 and Chondroitin sulfate).

Bone broth is another good way to get glucosamine.

The advantage of giving snacks to your dog is of course it is easier and more enjoyable for the dog.

But it is more difficult to gauge how much glucosamine there is in the snack. You may need to give a lot of snacks to get the desirable effect!

I would give glucosamine from food sources (e.g. bone broth, snacks) to dogs mainly as a preventative.

Like, starting to give such foods to the dog when she is 4 or 5 years old (younger if the dog is prone to osteoarthritis such as Golden Retriever). That way, she is getting an early constant addition supply of glucosamine to help prevent joint damage down the road.

Or, I would give older dogs these snacks and broth as a secondary source of glucosamine in addition to the regular supplement.