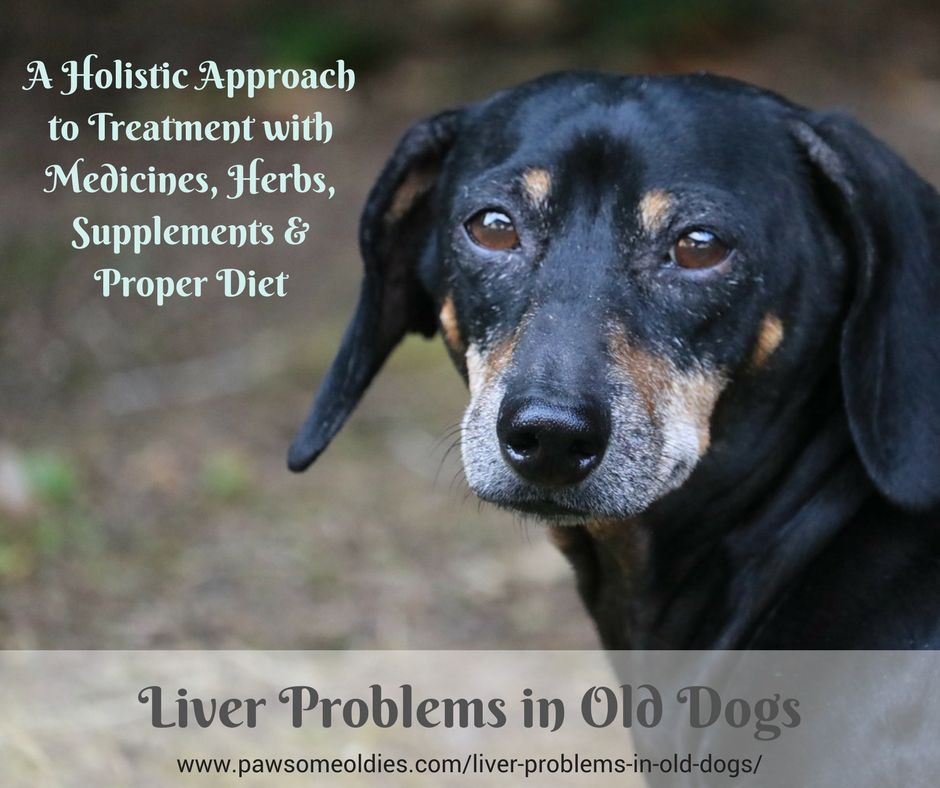 This post looks at liver problems in old dogs and how to adopt a holistic approach to treating liver disease in dogs.

The liver handles lots of different tasks – from detoxifying wastes and cleansing the blood, metabolizing nutrients (fat, carbs, proteins), to the storage of vitamins, minerals, glucose, and more.

Because of the numerous functions it handles, it is rather easy for the liver to develop problems or disease – Especially when a dog ages and major organs start to deteriorate.

Dog liver disease is just a general term that refers to the fact that a dog’s liver is not functioning normally. As you can see below, many things can cause liver disease/problems in dogs.

The best thing you can do for your oldie is to reduce as many risks that may cause liver disease as possible. We will look at how below.

This post takes a look at the following topics:

There are quite a few things that can cause liver problems in dogs, such as:

Also, eating something poisonous (e.g. some poisonous wild mushrooms) can cause liver damage in dogs. As can heartworm infestations.

Like kidney failure, liver disease in dogs are classified into four stages.

The first stage of liver disease in dogs is inflammation (i.e. hepatitis, which is an inflamed liver).

At this stage, the dog shows no pain and few or no symptoms.

If diagnosed at this stage, the liver disease can usually be treated successfully using medicine.

If an inflamed liver is left untreated, it will deteriorate further to reach the second stage.

Fibrosis is the first stage of liver scarring. As you can imagine, hardened scar tissues in the liver make it difficult for blood to flow through the liver.

One function of the liver is to detoxify the blood, but because of hindered blood flow, it can no longer do the job as well as before.

As a result, blood works will show abnormal numbers, although the dog may still have few or no symptoms. (This shows how important it is to have regular checkups for oldies.)

If the dog receives timely treatment at this stage, it may still be possible for the liver to heal over time.

If fibrosis is left untreated, the liver continues to form scar tissues until the scarring is too serious to be repaired.

If a dog has cirrhosis, it means that about 75 to 80 percent of his liver is irreversibly damaged, and the dog will start showing symptoms.

Treatment at this point cannot heal the liver. It can only prevent or slow down the liver from deteriorating.

The final stage of liver disease is liver failure, which is a a life-threatening condition, as the liver is not functioning anymore.

At this point, the dog might become comatose and die.

As mentioned above, at the early onset of liver disease, a dog usually shows few or no symptoms at all.

Gradually, the dog may start drinking more water and urinating more. He may start losing his appetite and gradually will lose weight. As a result, he will grow weaker and may become lethargic.

Also, the dog may have tummy issues, such as constipation, diarrhea, vomiting, gas or bloating.

Another common symptom of liver disease is jaundice, a yellowish tinge to the skin. Usually, you can see the tinge in the eyes, gums, and ears.

Sometimes, the dog may also have personality change. In traditional Chinese medicine (TCM), the emotions associated with the liver are anger, irritability, aggression, fear, and frustration. So, the dog may become “snappy”, may suddenly attack a visitor, or he may become afraid of loud noises.

As liver disease progresses, the dog will start showing neurologic issues, such as seizures, disorientation, and head pressing (against the wall or furniture).

You’ll probably agree that it is definitely not easy to associate some of these symptoms (e.g. allergies, personality changes) with liver problems!

The definitive diagnosis of liver disease is of course through blood works and urinalysis.

As with any disease, using a holistic approach to treatment is preferable, as we can get the best of both worlds!

Depending on the cause and symptoms of the liver disease, medication will be prescribed for a dog with liver disease to lessen the symptoms and if possible address the cause.

Holistically, we should also look at the following:

If a dog has liver disease, pay attention to the following:

Proteins: Proteins should be of high-quality animal protein sources, and preferably low-ammonia-producing – especially for dogs with serious liver disease.

When a dog’s liver is severely damaged, it cannot convert ammonia in the blood into urea. Instead, the ammonia gets into the body and can cause problems.

Fat: As fat is processed in the liver, feeding too much fat to a dog with liver disease can cause distress to the liver. But since fat is needed for energy, low amounts of “good fat” (e.g. salmon oil – rich in Omega-3 fatty acids) can be added to the diet.

If your oldie has liver disease, feed him 2 to 3 times a day in smaller portions each time so that the liver doesn’t have to work too hard to process the fats in the meal.

Also, dogs with liver disease tend to have fluid retention in the body. Reducing salt intake can help prevent this problem.

Herbs that can help support the liver include:

Milk Thistle is a “liver herb”. It is extremely effective and is widely used to support liver health. It can increase bile flow, help rebuild damaged liver cells, and strengthen cells that have been exposed to or damaged by toxins.

Turmeric has similar liver-protective qualities as milk thistle. In addition, this herb has anti-cancer and anti-inflammatory properties.

Artichoke leaves, when used as an herb, have similar properties as those of milk thistle, with additional cholesterol protective action.

Licorice, when used together with milk thistle or turmeric, is a good liver tonic. It has excellent anti-inflammatory and anti-oxidative properties.

This herb is rich in B vitamins and trace minerals, supports bile flow, and detoxifies the liver and gallbladder.

Here is an herbal formula that works well for dogs with liver problems:

Supplements that beneficials old dogs with liver disease include:

You probably have heard of SAMe, which is a substance that affects all cells in the body, but especially liver cells.

SAMEe is a precursor of a powerful antioxidant called glutathione. Glutathione is essential for liver health, as it protects liver cells from damage.

DMG is a building block for many important substances that are responsible for detoxification and fat metabolism.

NAC, similar to SAMe, is a nutritional precursor for the synthesis of glutathione.

Liver problems can wreak havoc to the health of our oldies, to say the least.

So what can you do to prevent liver problems in your old dog?

First of all, reduce or eliminate the use of environmental toxins, such as pesticides, carpet cleaners, air freshener sprays, etc. As much as possible, use natural products.

Feeding your old dog a natural, well-balanced diet with high-quality animal-protein sources also helps. Also buy natural healthy treats, or better yet, make your own healthy dog biscuits! And, don’t forget to give your dog clean filtered water to drink.

It is also important to minimize using drugs on old dogs. For example, instead of using chemical-laden flea collars or “spot on” flea treatment, use natural substances such as essential oils. Instead of using painkillers for joint pain, use supplements such as glucosamine, herbs, or try acupuncture, etc.

If your dog has been on a course of antibiotics, NSAIDs, or other conventional medicine, use the herb Milk Thistle to help detoxify the liver.

Do a liver cleanse every few months to keep your dog’s liver in tip-top condition.