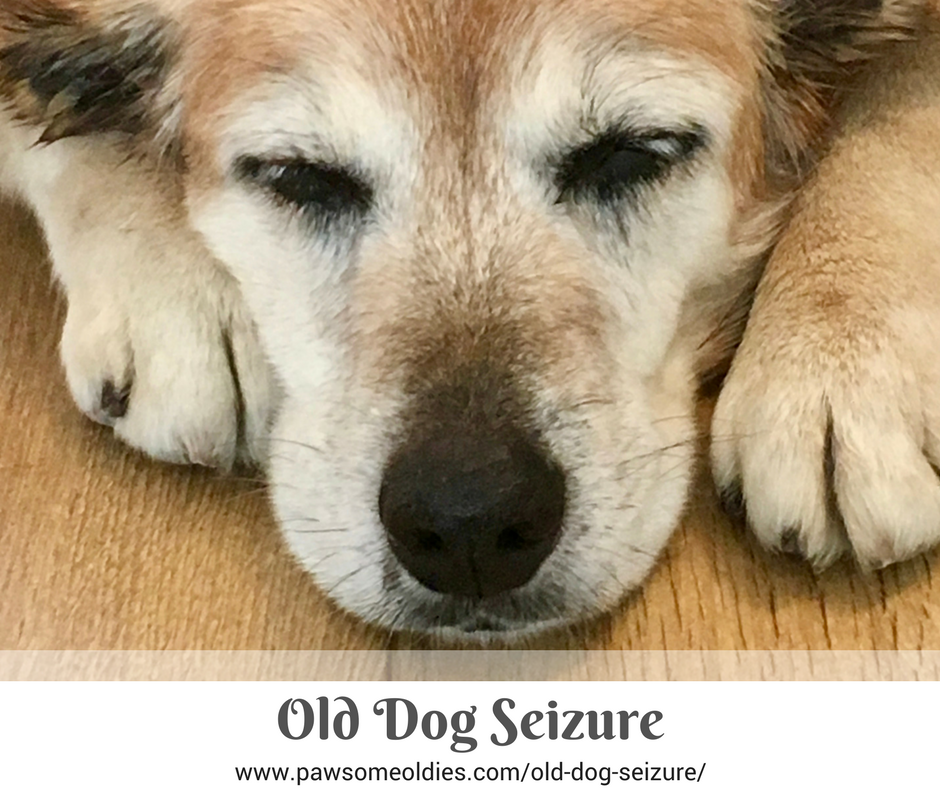 Witnessing an episode of old dog seizure could be scary and traumatic.

Seizures can happen to all dogs, of course, but in older dogs, the causes are usually more severe.

In particular, if your old dog suddenly has episodes of seizures, take her to the vet for a checkup immediately. Don’t wait, as the seizures could be brought on by serious health issues, such as a brain tumor.

What Exactly is a “Fit”, or Seizure?

According to epilepsy.com, a seizure is a sudden surge or burst of electrical activity in the brain.

A seizure itself is not a disease, but rather a symptom of different kinds of diseases that affect the brain.

A dog can have a generalized seizure, or a partial seizure.

You may have heard of “grand mal seizures”. They are one type of generalized seizures, and is the classic type. (Another term for this type of seizure is “tonic-clonic seizures”.)

The first stage is called the Aura and it happens right before the actual seizure.

When a dog is in this Aura stage, you will notice some distinct behavioral changes in him. He will show feelings of anxiety, restlessness, and nervousness. He may be whimpering, drooling, and may come to you for comfort… It’s as if he knows something wrong is going to happen to him.

Then comes the second stage, which is the actual seizure itself.

The seizure usually has two phases.

The first phase is called the “tonic phase”. The dog becomes unconscious and collapses with their limbs extending out rigidly. Very often, the dog drools, sometimes excessively. The dog may also lose control of his bowel and bladder.

Then comes the second phase, called the “clonic phase”. The dog can be seen moving his limbs rapidly, like paddling or running in place. His mouth can be seen opening and shutting, like he is chomping on something. That’s why we shouldn’t put our hands near the dog’s mouth while he is having a seizure. Otherwise, you may be bitten accidentally by the dog.

The dog’s breathing is usually not smooth so his tongue may turn blue. This phase could last for up to 2 minutes.

If the seizure lasts much longer, you need to get him to an emergency clinic immediately.

In my 15-year-old dog’s case, her seizure (likely caused by a brain tumor) went on for over 30 minutes. Despite 3 to 4 injections of different anti-convulsive drugs were given, nothing could stop the seizing. She never came out of this phase and we made the hard decision to let her go peacefully.

The last stage is the “post-seizure” stage, in which the dog regains consciousness, but he is still “groggy” and disoriented. He may try to get up and walk but end up bumping into a wall or furniture. He may remain in this condition for several minutes but sometimes it could be hours or even days before he is totally back to normal.

Another type of seizures is partial seizures.

Depending on the part of the brain affected, the seizures could affect the dog not only physically (twitching of one side of the face, blinking uncontrollably), but also behaviorally (unprovoked aggression, irrational fear).

Sudden onset of seizures in an older dog usually means there is an underlying health issue. It is unlikely that the dog is epileptic – otherwise he would have had episodes of seizures much younger.

So what are the common causes of old dog seizure? Let’s take a look:

Brain tumors are rather common in older dogs. It is said that over 95% of dogs over 7 years old have some form brain tumors! If your older dog sudden starts having seizures, don’t delay – take him in for a physical checkup immediately.

An MRI or CAT can reveal if there is a tumor in the brain or not.

If the cause of seizures is a brain tumor, as in my dog’s case, anti-convulsive drugs will not control the seizures.

Depending on the part of the brain affected, a stroke may cause seizures in dogs.

If the kidneys cannot filter out toxins in the blood due to kidney disease, toxins that have built up in the blood can cause seizures in dogs.

The liver is a complex organ and is responsible for a zillion tasks, one of which is to detoxify wastes in the body. It is not hard to imagine that if a dog has a chronic liver problem (which is rather common in old dogs), toxins that have entered the body cannot be metabolized and detoxified. As toxins buildup become serious, it can affect neurological functions and seizures can occur.

Sometimes if a dog has diabetes and has an insulin overdose, the low blood sugar level could cause a seizure to occur.

This could happen to all dogs but it’s a common cause of seizures so I would like to mention it.

If a dog has ingested toxins such as rat poison, antifreeze, some medications, etc., he may end up with a seizure. See this page for the common toxins that can cause seizures in dogs.

If you notice your dog is about to have a seizure (in the aura stage), quickly lead him to a quiet, safe place. Or remove some objects around the dog so he won’t hurt himself while seizing.

If you have other pets in the house, remove them from the area so that they won’t disturb the dog.

Stay calm. It’s easier said than done, but there is no use to panic as it will only make things worse.

Here are two ways that may help shorten an episode of old dog seizure:

This is a treatment that I came across during research on this topic. Not sure how effective it is, but it doesn’t hurt to try!

Just before the dog starts seizing, apply pressure on one or both eyes. This pressure stimulates one of the cranial nerves, causing GABA to be released into the brain. GABA is a neurotransmitter that decreases brain activities that have gone out of control.

According to some dog parents who have used this OC technique, they have seen shorter seizure attacks, shorter post-seizure phases, and fewer post-seizure adverse effects (e.g. confusion, disorientation).

A Word of Warning

Since pressure has to be put on the dog’s eyes, this technique should NOT be used on dogs with eye problems (e.g. glaucoma).

Alternatively, try using acupressure on the dog. There is an acupressure point – GV26 if you want to know the name – which is located where the nose meets the upper lip (immediately below the nostrils).

This very potent point is indicated for, among other things, seizures. Hold the point for 1 minute immediately before a seizure.

(You could also hold this point during a seizure but be very careful not to be bitten accidentally by the seizing dog.)

What to Do When a Dog is Having a Seizure