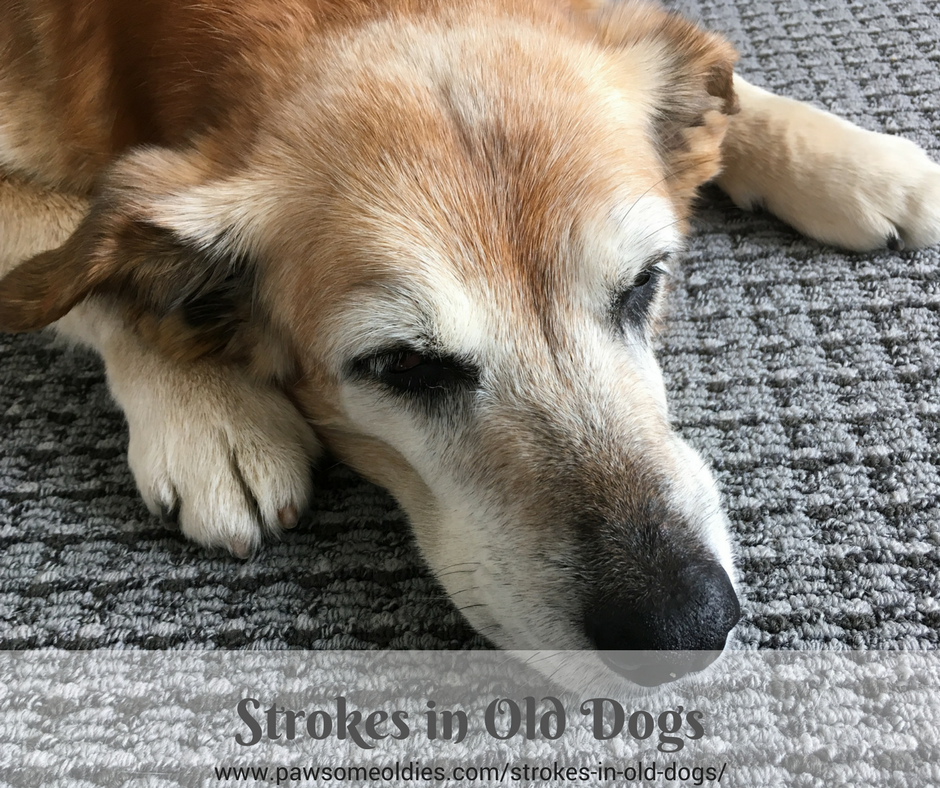 Strokes in old dogs are rather prevalent.

It used to be commonly believed that strokes do not happen as frequently in dogs as they do in humans. Recently, more common use of MRIs has revealed that actually strokes in older dogs are not as rare as we thought.

I had first-hand experience not long ago when my 15-year-old dog Hana had a stroke, and it was quite frightening.

What Exactly is A Stroke?

Simply put, a stroke occurs when the blood supply to a part of the brain is interrupted.

A stroke can be the result of an infarct (blockage) or a hemorrhage (bleeding).

In pets, strokes caused by a blockage is more common.

Causes of Strokes in Old Dogs

There are numerous possible causes, but in older dogs, a stroke can be triggered by:

The signs and symptoms depend on the location as well as how serious the stroke is.

Commonly, the dog shows signs and symptoms of vestibular disease, such as:

A stroke can happen very suddenly.

In my dog’s case, she was happy and normal on the day it happened. Suddenly, when she wanted to get up from her bed, she staggered and fell down. She couldn’t hold her head steadily, and her eye movement was abnormal.

When we tried to help her get up, she couldn’t put weight on her hind legs and fell back down. Then she vomited because of dizziness.

Because the signs and symptoms of a stroke are so similar to vestibular disease, we should always take the dog to a vet for a proper diagnosis.

Vestibular disease is not a life-threatening disease and most dogs can recover after a couple of weeks, but a stroke is a totally different story. Without treatment, brain damage could occur.

Diagnosis and Treatment of Strokes in Dogs

The definitive test is a CT scan and/or an MRI. Other tests may include a complete blood test, a urinalysis, x-rays, ECG, and of course a thoroughly physical examination.

Depending on how serious the stroke is, some dog patients may need to be hospitalized.

The most urgent task is to stabilize the condition to prevent swelling of the brain and re-establish blood circulation.

For that, the initial treatment usually consists of IV fluids and intravenous corticosteroids. For steroids to be effective in preventing permanent brain damage, they have to be given immediately after the stroke.

Other treatments are given to help lessen the symptoms. For example, drugs may be given to help prevent vomiting, or anti-convulsive drugs to prevent seizures, etc.

Fortunately, dogs recover from a stroke far more quickly than humans do. Once the body re-establishes regular blood flow to the brain and the swelling has gone down, the symptoms will gradually disappear.

In My Dog Hana’s Case

Hana had had a very mild stroke, so she didn’t even need intravenous steroids. She was given anti-nausea medicine and antibiotics (in case the stroke was caused by an infection).

The first few days were hard for her – she couldn’t go up and down the stairs so we had to carry her outside for potty. She would lose her balance when she tried to squat and would fall over.

We trained her to walk in the house, and massaged her limbs to help blood circulation and avoid muscle weakness.

After a week or so, she re-gained most of her balance, could go upstairs by herself (going downstairs was impossible), and could go for a decent walk without losing her balance too often.

But she lost her hearing completely after the stroke. While she could hear high-pitched sounds (e.g. a whistle), she couldn’t hear us calling out her name, or giving her a command like “come”, “stop”, etc., so off-leash walking outside became impossible.

According to Dr. Scanlan, DVM, about two-thirds of dogs who suffer a stroke recover well. Of these, about one third will have further episodes. The risk of recurrence and how well they recover depends on the underlying cause.

In my dog’s case, the one thing that helped her a lot was rehabilitation. We tried to keep her active (within limits of course), both her body and her mind, and I think that accelerated her recovery.

For dogs with more serious strokes and therefore more damaging after effects, such as seizures and weak limbs, acupuncture and massage may help. A support harness can be used to help lift up a big dog.

Antioxidants, especially those that have neuro-protective properties, such as astaxanthin, superoxide dismutase, and vitamin E, should also be supplemented.

A study has shown that the neuro-protective effects of Astaxanthin are associated with its antioxidative and anti-inflammatory properties. The study also found that Astaxanthin is a safe nutrient, and when consumed with food, it has no toxic effects.

Astaxanthin occurs naturally in krill oil, which is also rich in Omega-3 and Omega-6 fatty acids.

Superoxide dismutase (SOD) is another antioxidant that benefits old dogs after having a stroke. It’s a powerful free-radical scavenger and has been shown to improve blood flow to the brain after strokes.

Witnessing your pawsome oldie having a stroke and watching her struggle to cope with the disabilities brought on by the stroke is heart breaking. I hope you don’t have to go through that. But in the unfortunate event that you do, please stay strong and positive for your dog. And please do share your experience below.